Ever wondered what your workforce get up to during the day; with or without supervision?

With COVID-19 changing the way in which we do business,  now more than ever business need to look at how they do business,  and in turn,  how their staff perform to meet the new challenges.  Business cannot afford to carry employees that do not perform,  and when the employee now works from home,  it makes it more difficult to quantify their productivity.

ActivTrack meets the needs of the business to monitor and record user productivity by leveraging the power of the cloud with Silent Monitoring to provide business with the information they need,  when they need it.

ActiveTrak silently tracks every aspect of what the user does during the day.

It periodically takes a screenshot so you can verify whether the "work done" was justified within the scope of Employment. 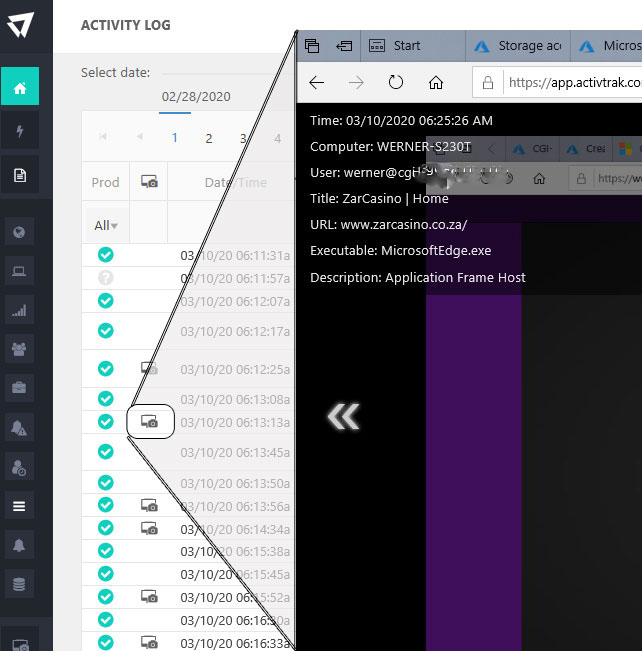 For only R 150.00 per user per month it may be the expense you need to turn your business around.

Speak to us about a limited trial

It is all about CLOUD!

We have come a long way and we have had to change our thinking along the way when it comes to storage.  From CD to Hard Drive to Flash Drive and now,  The Cloud.

In truth,  Cloud Storage in nothing different to storing files on your corporate server.  The only difference is that the server now resides somewhere in the world and not in your office,  freeing you from "Working in one place" and allowing you to access your files on ANY DEVICE,  ANYWHERE!

There is a multitude of companies that offer Cloud Storage Solutions,  the most notable of them all is Google,  Apple and Microsoft.  It is simple to get and simple to use.  Just sign in,  download and off you go.

For more advanced Cloud Storage solutions,  you are welcome to contact us and we can look at what solution will work best for you at a price point that meets your budget requirements

Welcome to our revamped Web Space!

It may be sparse,  but you have to start somewhere when cleaning up and starting over!

Over the following months we will continue to update this space with information and resources to assist you in making the right decision; Fast!

Because of the changes listed above, we strongly recommend that you upgrade as soon as possible.

What are your options?

A key difference between Office 365 and Office 2019 is that Office 365 is updated on a regular basis, as often as monthly, with new features. Office 2019 only has the same features that it had when it was released in October 2018.

This article provides guidance on upgrading to Office 365 ProPlus.

Why must I upgrade?

Upgrading your software is essential in ensuring that have the right tools at hand,  and it also allows you to take advantage of neat innovations and additions to the software offering.  Furhtermore,  it eliminates costly support calls and continued problems with compatibility,  reliablility and stability of the product accross Windows 7,  Windows 8 and Windows 10.